Like many comic artists have been grabbed by the strip virus.
He then tries to shape his own heroine Agvall.

In the mid-1990s, his comic career began to assist with the support of Merho
at some Kiekeboe short stories and Christian Denayer to help with the first albums
from the last Gord story.

In the meantime, he works with scenarios Ivan Claeys to further expand the universe
from his heroine Agvall. This results in 2 short stories.
One won the 1st prize at the Ganshoorn Festival in 1998.

At the end of 1998, the first strip album of his hand appears: for the Walloon publisher Coccinelle
he stamps the life of St. Jan Berchmans in “On the way with Jan Berchmans”.
And for the same publisher he does not make much later “Treasure hunting in the smallest town in the world”
which allows tourists to pull through Durbuy in search of directions
for the location of some scratchcards.

For the Bruges comic strip De Striep he records, on the scenario of old-known Ivan Claeys, “The Fifth Man”.
This story fully plays in the inner city of Bruges.

Due to his experience of drawing this city, he is available at Standard Uitgeverij
Pieter Aspe’s novels will be edited and expired.
Two albums appear: “The Square of Revenge” and “The Midas Assassinations”.

Again with Ivan Claeys, he signs Tommeke, the fictional youth of Tom Boonen.
There were two albums: “The Auto Virus” and “The Silver Bikes”.

Meanwhile he helps some colleagues. This is how he works on some Kaamelott albums, Interpol 1 and
Midgard of Steven Dupré and makes the pencil sketches of the first 15 pages
from the third part of “Disparitions” for Ersel.

From 2010 to 2016 he draws on the scenario of Sytse S. Algera, the thriller series De Vries.
This series appears in the stamp magazine Eppo. This series has 4 albums.

Together with scenarios Jean-Louis Fonteneau he makes for a small French publisher “Une femme pressée”. E
and a 24-page story.

With good friend, scenarios Ivan Claeys, he makes Mr. Nobody. His adventures appeared earlier
in the so-called Stripgilde members magazine and now continue in the magazine P @ per.
Hauwaert Uitgeverij provides the album editions of.

And his hero Agvall, are you asking? That has not been forgotten yet … 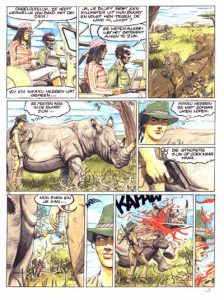 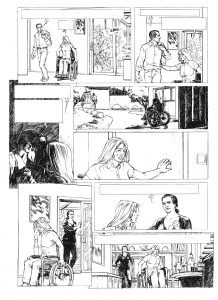 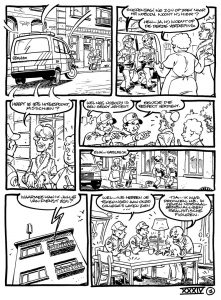 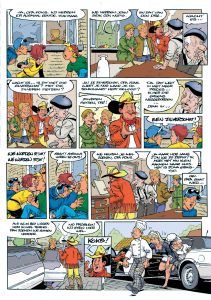