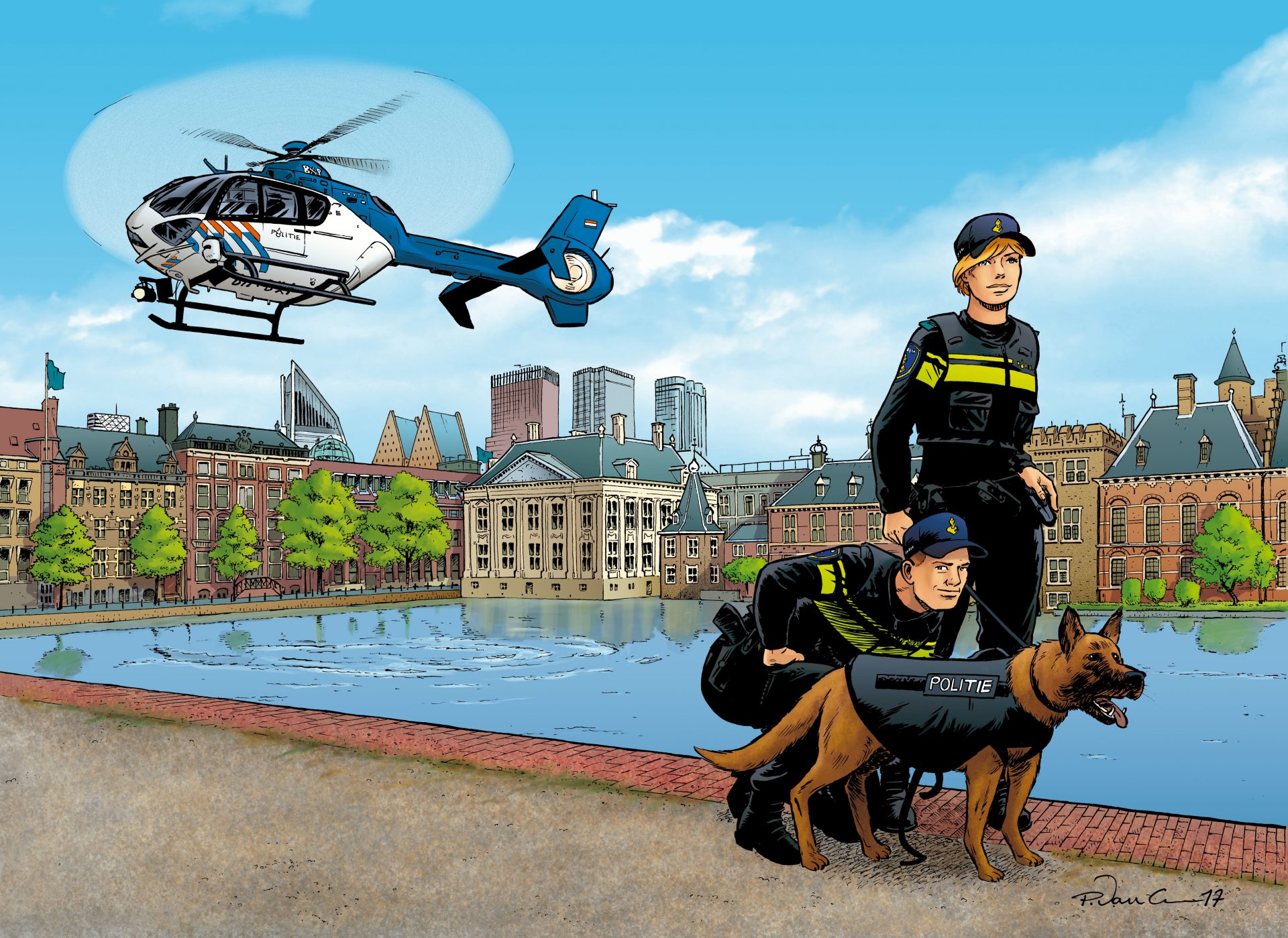 1.1 The present terms and conditions apply to all offers, requests, orders and agreements of Comicwatch in respect of supplies of goods and / or parts thereof, unless expressly agreed otherwise in writing.
1.2 If the other party, upon termination of the agreement, refers to its own terms and conditions, then we will reject it now, unless we expressly acknowledge that we accept these terms.

Article 2: Quotations
2.1 The quotes, price quotes and prices of Comicwatch are always free of charge.
2.2 Transmission of quotations and / or brochures and / or documentation and / or budgets and / or plans and / or price lists and the like do not oblige us to deliver or accept the order. The above-mentioned documents remain our property at all times and must be returned to us at the first request. Without our permission, they may not be reproduced or disclosed to third parties except insofar as this is necessary in the course of normal business practice.
2.3 Unless stated otherwise, all offers made in any form, valid for thirty days.
2.4 We reserve the right to refuse orders, without giving reasons, or under delivery.

Article 3: Agreement
3.1 Orders will only be accepted by Comicwatch when they have been confirmed by us in writing. The date of the confirmation is decisive. Orders also accepted by Comicwatch after Comicwatch has sent the relevant products at the customer’s request, with the invoice being considered as confirmation.
3.2 Each agreement is entered into on the one hand under the suspensive condition that the counterparty exclusively to our rating is sufficiently creditworthy for the financial performance of the agreement.
3.3 We shall be entitled to claim from the other party either upon or after the contract is concluded before or further, to demand a prepayment or to assure that both the payment and the remaining obligations will be met.
3.4 In case of termination of the agreement already entered into by the other party, we will be charged 15% of the order price due to a loss of profit, while the work or costs incurred up to then will also be charged.

Article 4: Prices
4.1 Unless otherwise specified, all of the entries of Comicwatch will be subject to price change.
4.2 Unless stated otherwise, our prices are: – based on delivery of company, warehouse or other warehouse;

Article 5: Delivery
5.1 Specified delivery times are only given, unless explicitly agreed otherwise in writing. Comicwatch is not liable to the other party for failure to deliver at certain times. If delivery does not take place within a reasonable period, the other party is then entitled to cancel the order and which he should already have paid back.
5.2 The other party is obliged to check the delivered or the packaging immediately upon delivery, but in any case within three working days, of any damage and / or deficiencies or to carry out this check after the notice on the one hand that the goods at the disposal of the opposite party.
5.3 Any damage and / or shortcomings of the package and delivered delivery and / or defects in the number of packages should be stated by the other party on the voucher / delivery note, the invoice and / or the transport documents. Deviations in the number of goods in the package and defects revealed when opening these packages must be reported within eight days after delivery to Comicwatch. The other party is deemed to be aware of the functioning of the property and is obliged to instruct users accordingly.
5.4 The agreed delivery time begins to run on the day that the written order confirmation is dated. If we have made a prepayment, the agreed delivery time begins not to run earlier than on the day that this prepayment is received by us.
5.5 We are obliged to observe delivery time as much as possible. However, we can not be held liable for and exceeding the delivery time that was reasonably unforeseen at the time of entering into the agreement. In such cases as: fire, riots, labor, transport difficulties and the like, we have the right to cancel the agreement or to extend the delivery time in consultation with the other party.
5.6 Unless otherwise agreed, delivery shall be effected by company or warehouse.
5.7 When the goods have not fallen after the expiration of the delivery period, they are stored at their disposal at their expense and risk.
5.8 We are entitled to deliver in parts (partial rewards), which we can invoice separately. If and for as long as a consignment is not paid by the other party and / or the other party does not comply with other obligations under the relevant agreement or earlier agreement (s), we shall be entitled to suspend any other deliveries without further notice and without legal intervention. to dissolve this agreement, without prejudice to our right to compensation for damages, costs and interest.
5.9 Unless agreed otherwise in writing, the customer will arrange for installation.

Article 6: Transport and risk
6.1 The manner of transport, shipping, packaging and the like will be determined by us as a good merchant, unless otherwise indicated by the other party to Comicwatch, without any liability whatsoever.
6.2 Transport is always done, even if free delivery has been agreed, at the expense and risk of the other party.

Article 7: Advertising
7.1 All complaints must be submitted to Comicwatch at least 8 days after delivery, stating our package / delivery receipt and / or invoice number, with the exact nature of the complaint and the complaint. Upon expiry of this period, the other party shall be deemed to have approved the delivered and the invoice respectively. As such, ads are not being processed by us anymore.
7.2 With regard to the advertising defects that may be used first, use can be made within 8 days after the defect has been discovered or could reasonably have been discovered, but no later than two months after the invoice date.
7.3 Advertisements may only be made in respect of goods still in the state in which they are delivered, except where there are hidden defects.
7.4 Advertisements will not be processed if it appears that the other party or third party has changed or repaired any items, except in case of prior notice and permission from Comicwatch.
7.5 In the event of a complaint found by Comicwatch, we are only obliged to deliver the agreed performance within a reasonable period of time.
7.6 Only if and to the extent that the advertisement is found to be well founded, this will suspend the payment obligations and other obligations of the other party until the advertisement has been settled.
7.7 Return of the delivery can only be made after our prior written permission,
Article 9: Interest and costs
9.1 If the payment period is exceeded, the other party is legally in default and Comicwatch is entitled to charge to the other party from the invoice date a rate of 1% per month or the legal interest if it is higher, with a portion of One month for a whole month is counted.
9.2 In the case of non-payment or non-payment or non-compliance with any of the other party’s other obligations, the other party, other than the purchase price and the interest, shall all collection costs, both judicial and extrajudicial, incurred by non-payment or Failure to comply with Comicwatch is due. The extrajudicial collection costs amount to at least 15% of the amount, including the aforementioned interest, due by the other party, with a minimum of Euro 125, and shall be payable in any case where Comicwatch is seeking recovery from a third party. insured. Already by turning on a third party, the size and the amount of payment by the other party to the extrajudicial costs without Comicwatch being shown to show that they actually incurred these costs.

Article 10: Retention of title
10.1 The ownership of the goods will first be transferred to the other party upon full payment of all Comicwatch claims in return for any goods delivered or to be delivered by and / or on behalf of and / or on behalf of Comicwatch to any other party pursuant to agreement, and for any shortcomings in the compliance with such agreements. The other party is obliged to take care of the care and the right to dispose of the goods to third parties, to pledge, to borrow or to remove or remove from the spaces where they were delivered until the total purchase price and The costs that may be incurred in full are fully paid, except insofar as this is necessary in the course of a normal business operation.
10.2 Under the suspensive condition that the reserved ownership transfers to a counterparty or any third party, whether or not for security, any property rights will remain in effect until all Comicwatch claims on any other party are fulfilled for any reason whatsoever. To the extent necessary, the other party hereby grants an irrevocable power of attorney to Comicwatch for the preparation of acts or the execution of any legal act to establish such a pledge.
10.3 In case of non-payment of a collectable amount, suspension of payment, payment of bankruptcy, bankruptcy, liquidation of the other party or death when the other party is a natural person, we shall have the right to order, without judicial intervention, The part that has yet to be delivered must be canceled and delivered, but not yet paid or not, to recover our property by deducting any fees already paid and without prejudice to our right to claim compensation for any loss or damage. In such cases, any claim which we bear at the expense of the other party is immediately due and payable.

Article 11: Liability
11.1 Subject to Comicwatch’s liability under enforceable provisions and generally applicable rules of fairness and fairness, Comicwatch’s liability is limited to the warranty obligation referred to in Article 9. Comicwatch is therefore not liable for and, consequently, never obliged to compensate for immediate or indirect damage of any kind whatsoever directly or indirectly including property damage to movable or immovable property or to persons both in the other party and third parties due to defects in sales and delivered or repaired goods.
11.2 Comicwatch is not liable for damage caused or caused by the use of the delivered or its inappropriateness for the purpose for which the other party has purchased it.
11.3 The other party indemnifies Comicwatch for all claims by third parties in respect of goods or services provided by Comicwatch unless it is established that these claims are directly due to gross negligence on the part of Comicwatch and the other party shows that in this regard no reproach.

Article 12: Subscriptions
12.1 When subscribing to one of Comicwatch’s periodic releases and publication of the relevant issue (s) is discontinued, Comicwatch will refund the subscription fee paid by the customer within a period of 6 months minus the cover price of the already received expense and the retail sale price of the received premium (s).

Article 13: Applicable law
13.1. All offers, requests, orders and agreements of Comicwatch and its implementation shall be governed by Dutch law.

Article 14: Disputes
14.1 All disputes, including those considered by the parties as such, arising out of or relating to the agreement to which these terms and conditions apply or the terms and conditions of their own and its explanation or performance, both of factual and legal nature, will be decided by the Civil Court, within our area of jurisdiction, as far as legal provisions permit.